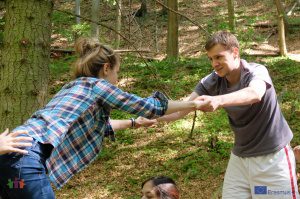 Radka participated on our May training organised under Brno Connected ans in this blog she is sharing her experience. The topic of our projects is very often personal development that is closely connected to learning and education. How to combine self- development, formal approached and those that are les formal? How to start from myself and transfer it to others?

“Basic Synergy Training Adamov. The training of basic synergy, or the basic training of synergy? After the approximate twenty years this method is used, it is hard to tell. And actually, does it matter? After all, the results you’ll get out of this training depend only on you. And sometimes, staying means giving yourself the possibility to think and see the world from a bit different angle. Well, many angles, actually. So who cares about the name.

And why do I say staying? Because at the beginning of my BST, it seemed to me; me with severalyears’ experience with training forma n international student voluntary organisation; that it maybe has nothing new to bring me. And for more, I did not feel very good in a group of people I have so less in common. I, the introvert in a mask, am not really good with this. So honestly, I had very intensely thought about the investment of my ten days. „Wouldn’t I use them better at home? I don’t really have much time to waist, more the opposite.” The whole first day, this thought was nesting in my head and so it did the day after. And for even more, I’m the idiot who always follows the instructions and is not consciously making things easier for herself. So I caused myself slight panic and a feeling of destroying the whole training by the decision I have made at its very beginning.

So why did I not leave? Because I am not running away, right. And also, the slow beginning was 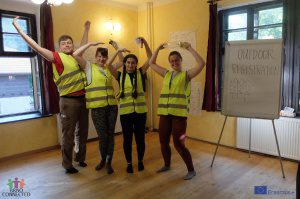 followed an imaginary push from a cliff. And suddenly, I was sharing things I had probably never confronted before with a total stranger. I was offered the possibility to make steps I would maybe never make. The group atmosphere changed suddenly; even outside the scheduled program, we shared our stories and feelings, and asked questions after which our friends back home would only roll their eyes. And so I stayed – deciding to learn from other and myself and share; thus, let others to learn from me. Giving others a chance to meet the person I really am. 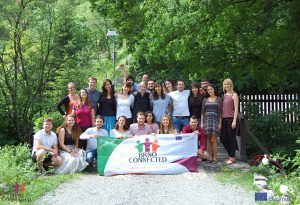 The ten days flied and suddenly, saying farewell, I have discovered I have my own bond with these people. The strangers, with whom I had nothing in common the ten days back except for the language we spoke, were suddenly so close despite the fact I did not have a proper conversation with some of them. But about this, the non-synergy people might only smile. Well, and what ;-)”

Funded by the Erasmus+ programme of the European Union.