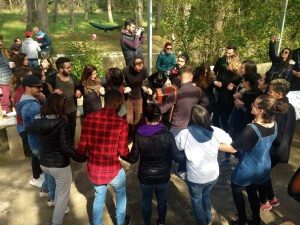 How was Kate’s visit in Italy? And what did she take from it?

The project „3 Steps To Be Intercultural“ was held in Santa Sofia village, ten minutes by car from city of Laconi, which is located on Sardinia island. The project was held 21st – 30th March 2015. Sardinia has an important long history. Good example is the museum in Laconi, where you can see some menhirs standing stones from the Neolithic period. Laconi and the other cities which are close are occupied by huge mountains, which means there is kind a colder weather than in the other places on the island. I would like to recommend you to visit also this nice land. 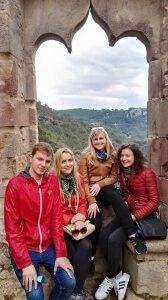 Participants were from Ukraine, the Czech Republic, Sardinia, Portugal and Croatia. Also, we had EVS participant Tom from England. Two other guys from Croatia and one Portuguese girl did also EVS before and they were talking about EVS in really good way so I think a lot of people from this project started to think about doing EVS. All of us had the great experience to feel Italian-Sardo atmosphere, to feel their culture – sun, good emotions, good wine and beer, good salami, spaghetti, italian pizza, happiness, wiliness, interest and no stress.

The accommodation could be better but the important thing was that we tried to share rooms with the other nationalities which is great way how to know each other more. Food was prepared by Sardinian people. They were amazing – they tried to speak an English language even if it is so hard for them. But of course – all of us needed to practice English speaking. The main topic of the project was „Stereotypes in Europe“ . I hope we did it clearly for any other nationalities that Czech Republic doesn´t mean only beer, socks in sandals and Russia. J 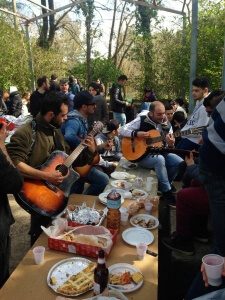 People from different countries in Europe had the same feelings for travel, for education, culture and laughing. Activities such as egg cover (later the egg fell down from the 2nd floor), people changing their position while they are standing on the chairs from the tallest one to the smallest one, city game by small groups, playing scenes typical for other countries, and also intercultural evenings meant 100% sure of laughter. Our Czech group was an amazing! One of our participant, Roberta, she is from Slovakia, so it means we are still kind CzechoSlovakia J I really appreciate help of all organisers, their planning activities etc. Carlo, Davide and Samanta did a lot for us. Also, because Carlo plays on the guitar very well, we had nice music evenings. Because we spent on Sardinia island Easter time, we were part of typical sardo celebration of Easter, which means barbecue, drinking wine, trying special Easter meals and meetings with friends. Although we had cold days I would like to say thank organisers for buying pills for ill participants (for example me), giving us free blankets and heaters. 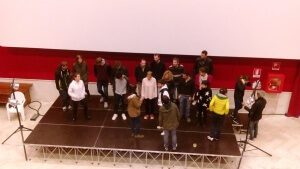 The final day we had theatre performance which was mix of music, theatre and cuisine. During the first days we choose which one is our favorite group and all the week we prepared it for this final day. The audience was so pleasant and very happy after all.

In my opinion this project was a great experience for our future. Hopefully we will stay in touch no matter from which country we are. Thank you that I could be part of it.

Funded by the Erasmus+ programme of the European Union.