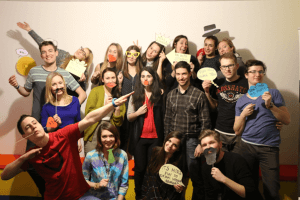 Olivie, Linda and  Kristína went to Romania to participate on the project Mediagraphy#2. How did they like it?

This great idea to go to Romania for a week was created in the head of my roommate Linda. I must admit that I was not very thrilled about the destination at the beginning, but when I read more about the content of the project, it intrigued me so much that I did not hesitate and filled the application form immediately! To broaden your horizons in the field of social media and self -branding cannot be a bad idea, right?

Journey went smoothly and after few hours we arrived to Iasi. Nice Romanian girl welcomed us at the hostel and accommodated us.  Right after our arrival, we decided to go out to explore the beautiful city of Iasi. Later on we enjoyed the first dinner together with all the participants. It was great, the owners of the restaurant were very hospitable, the food was excellent and all project participants were full of energy and we made a perfect team and became friends very soon.

Throughout the week, we had a variety of group activities, we went to the city center to discover local brands of Iasi, we have learned how to work with photography. We tried method called Elevator pitch to learn to how to properly speak and present ourselves in front of public. In the middle of the week, one local entrepreneur came to see us and to do lectures for us and at the end of the week we had to create our own workshops .

Days went by very quickly, the program was always full from the early morning, leaving us so little time to get to know the local culture better. Maybe next time.

I didn’t know what exactly to expect from such a project, but I was pleasantly surprised.

On our way from the airport to the hostel, a half-crazy taxi driver (and we suspect he was also half-blind) was playing romanian pop hits on his tablet with a 4G internet, concentrating on his dance moves more than on the road in front of him. On request he also played Karel Gott’s (czech superstar singer) songs for us. It was quite a wild ride with him.

After that we were kindly received in a pleasant and nice hostel and a lovely city full of churches and dogs was waiting for us. The following days would be filled with a lot of activities. The schedule was pretty demanding but everything we did taught us something new. Right on the first day we were told it wasn’t going to be like at school as we know it. Non-formal education which was to be provided by our facilitators is a non-traditional way of learning. We wouldn’t be forced to do anything, there would be no exams and it would be up to us what we gain and learn by taking part.

Playfully we were developing our presentation skills, computer skills, soft skills, photography skills, we learned how to work with certain apps and we learned a lot about ourselves as well during the process. We learned a lot, we laughed a lot. In the evenings, we often met in our  “cozy room” downstairs at the hostel where those who still had some energy left played games or danced to Ruslana’s songs.

The week fly by very quickly and by the end we could’t believe it’s over. To meet awesome people from 4 countries, communicate in English, discover a lovely city in a country where I hadn’t been before, get inspiration and knowledge – I managed to do all that in just 8 days. Thank you, Mediagraphy+ for this opportunity.

Linda
When I finished my winter semester at University, I wanted to spend free time productively. I found the newsletter of Mediagraphy project on web, so I decided to apply. At the end of the project I had already known, it was good decision. I found new friends and I realized my values. It was amazing experience, which I will not regret ever. The project took about 9 days and every day was different. The topic of this project was exactly for me, because I am studying Marketing and Business. Since that time, when I listen the song Salsa Tequila Corazon, it reminds me Iasi and the project.
Kristína