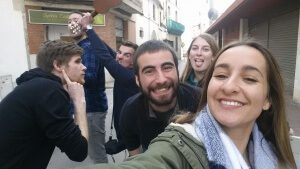 … while the song goes on, 26 people from 9 different countries are gathering in a training room. As they are sitting down on chairs in circle, many of them tap, legume or swing in the rhythm… As the final chorus approach, the room explode in spontaneous eruption of singing, which makes everyone dance, even the biggest grumpy cats and planks. Welcome to the Youth Exchange E(a)ffective Communication. Many of us cried, but they were tears of joy. 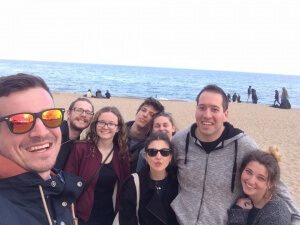 Thursday, the 23rd of February, Canet de Mar, near Barcelona. Sunny Spain. At least I was imagining it so.

The country greeted me with cloudy sky, cold, and next day also with the rain.

“At night, I’m getting frozen,” my friend confessed.

“When I sleep under three blankets, I’m fine,” I told her.

“I have a sleeping bag and four blankets and I’m still cold.”

Therefore, we were calling the sun, altogether with team-leaders and organizers, next day. And it has come!

The third day welcomed us with beautifully blue sky and almost 20 °C. Great weather has lasted until March 2, when the course ended.

How Do You Communicate 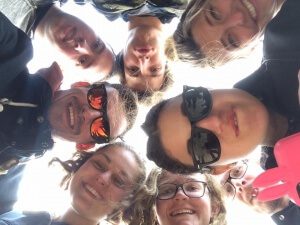 The door is finally opened and we might enter the training room. Chairs are in a circle bordered by a rope, which mustn’t be exceeded. There is a card with a name and basic instruction at each chair.

Someone has bounded legs, someone is blinded, I and others are forbidden to speak. Some people have no handicaps. Organisers are silent. What should we do? There is no explanation, only countdown projected on a wall. We have 45 minutes to solve the mystery…

Our games, task and workshops were just like this. They demonstrated us how do we communicate without telling it to us directly.

“This was a perfect simulation of handicapped people in society,” someone mentioned in the final sharing after the game. “It showed us how we are excluding them out of a society and taking them space.”

Even such conclusion could be reached. It depended on us what we will take from the activity.

I train, you train, we train 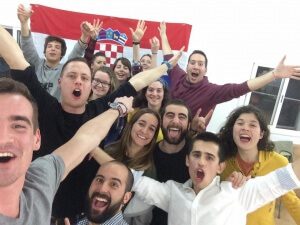 On the third day, trainer said: “We have toiled enough, now it’s up to you. Divide into groups and create workshop for others.” By doing that, he provided us space for self-expression.

On the other hand, a mere half day is pitiful time for preparation. But we did it. We put together six workshops: about presentation, group dynamics, body language, alternative communication style and others.

What have you learned?

For the last day we went to the beach and walked along the shore for half an hour in a complete silence. Then, we sit on a sand and had a chance to write down what have we learned during the exchange.

In twenty minutes, I had put on paper 16 different things. A fairly decent number, I thought. 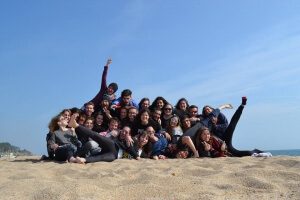 So many things impossible to express had happened: dancing, drumming, spontaneous singing, long evenings on a beach, beatbox, cultural evenings and much, much more.

I have visited a few Erasmus+ projects already, but I should say I was surprised how close connection people had created and how much we had learned not only from trainers, but also from each other.

“What you gonna do to keep the feeling of happiness that you experienced on the course?” I asked.

“Every time it will be needed, I will put on our song,” my friend replied.

That song is here for you as well: